We love our territory very much and we always have a lot of things to offer here, but we also know very well that those who come here do not resist the charm of the Cinque Terre. This is why we are writing a series of posts to make it easier for you to move around Levanto and tell you what you can see besides our beloved town!

Today we take you to Corniglia, the third of the Cinque Terre villages (we have already talked about Monterosso and Vernazza). Corniglia, part of the UNESCO World Heritage Site together with the other four villages of the Cinque Terre, Porto Venere, the islands of Palmaria and Tino, is the only one of the five not to overlook the sea, but on a raised ground about one hundred overhanging meters surrounded by vineyards.

It is part of the municipality of Vernazza and with this post we will get to know Corniglia more closely.

From Levanto to Corniglia: how to get there

The easiest and cheapest way to get from Levanto to Corniglia, as well as for all the Cinque Terre villages, is by train, which in about 12 or 14 minutes depending on the train taken will take you to your destination. The trains are very frequent, so you can move without too many problems of time and in this post you will find the tables with the timetables. Corniglia has a railway station from which you can reach the village along a long staircase (the Lardarina) of 33 ramps and 382 steps, or through the Via alla Stazione. Alternatively, there is a bus service to and from the station.

Unlike the other Cinque Terre villages, for obvious logistical reasons it is not possible to reach Corniglia from Levanto by boat. There are no buses between Levanto and Corniglia and getting around by car is not recommended in high season because of the very few parking spaces available.

A taxi between Levanto and Corniglia will cost you between 30 and 40 €.

Arriving on foot from Levanto to Corniglia is starting to be a nice walk because it takes about six hours. If you decide to reach Corniglia on foot make sure you find all the necessary information. Vernazza and Corniglia are joined by a beautiful walk on a path halfway between the summit and the sea. From Levanto to Corniglia: what to see

Corniglia differs from the other villages of the Cinque Terre due to the fact that it is not directly overlooking the sea, but is located on a promontory surrounded by vineyards arranged on terraces.

The village has Roman origins and is mentioned in Boccaccio’s Decameron (“[…] And then in a very white napkin he brought two slices of roasted bread and a large glass of Vernaccia da Corniglia […]”).

Unlike of Monterosso, Vernazza, Manarola and Riomaggiore, Corniglia is more linked to the land than to the sea and also the urban conformation is more reminiscent of the countries of the hinterland than those on the coast. The inhabited area (which today counts about 300 people) develops along Via Fieschi, which develops from the parish of San Pietro to the terrace of Santa Maria. The view from this belvedere is magnificent: on one side the mountains and the Sanctuary of Nostra Signora delle Grazie, on the other the sea and Marina di Corniglia with Guvano‘s crescent-shaped beach, made of sand and pebbles and turquoise sea and crystalline.

Among the monuments of interest there is the Church of San Pietro, a testimony of Ligurian Gothic built in 1334 on the remains of a chapel of the XI century. It is built with materials sourced from quarries bordering on slate and Carrara marble (such as the rose window). Inside there is a baptismal font from 1100, a barrel vault, a polyptych and several frescoes. The main square of the town is Largo Taragio, where the oratory of Santa Caterina is located, whose construction dates back to the 1700s. From this square a stairway leads down to the marina of Corniglia. Do not stop at the Oratory of the disciplined Santa Caterina but head to the back side, where a terrace opens up with a spectacular view of the Cinque Terre.

The Sanctuary of Nostra Signora delle Grazie, where the Madonna with Child is venerated, is another place to don’t miss San Bernardino, a hamlet of Corniglia and part of the “Sanctuaries of the Cinque Terre”. Rebuilt in 1800 on the remains of a medieval chapel, the Sanctuary preserves a precious canvas from which derives the veneration of the Madonna, celebrated on September 8th.

For those who love trekking, Corniglia offers several paths on which to walk and admire beautiful landscapes including the one that goes up to Vernazza with a journey of about two hours. 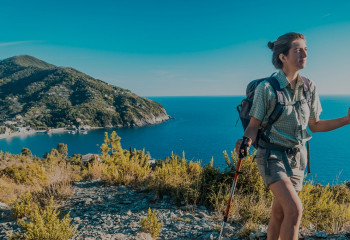 Levanto and its nuances

By Serena Puosi Each new visit to Levanto takes on original colors, as if it were unwilling to reveal itself… 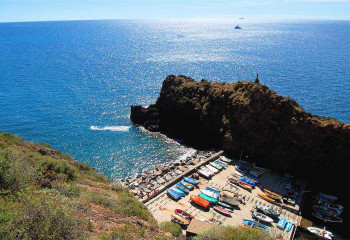 Cycling by the sea: the cycle path MareMonti

Levanto has always had a bit of a love affair with  the bicycle… Cycling leisurely, and often aimlessly, around town…